American experts develop carbon materials based on sheet-like nanostructures that are stronger than diamonds in terms of intensity-to-density ratio.

The team, led by Dr. Jens Bauer from the University of California, Irvine (UCI), USA, has succeeded in conceptualizing and fabricating new nanostructured carbon materials, including sealed cell panels. tightly together instead of cylindrical beams that have been popularly used over the past few decades.

"The cylindrical beam designs were of great interest in the past but were not as efficient as mechanical properties. The new sheet-nanolattice we created were significantly stronger and stiffer than they were. with the best beam nanolattice, "Bauer said.

According to a report in Nature Communication, the new design has proven to have reached the theoretical limit of performance, helping to improve up to 639% durability and 522% hardness compared to the cylindrical beam structure. 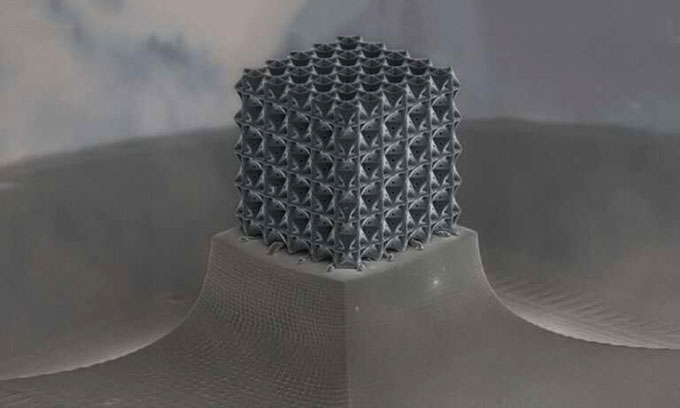 Carbon materials are based on sheet nanostructures for superior strength and rigidity. (Photo: Phys).

"Scientists have long predicted that nanoparticles arranged in sheets will be extremely strong, but they have difficulty producing structures in this way. That means the theory has not It was never proven until we conceptualized and successfully built it, "said engineer Cameron Crook from UCI, a member of the research team.

The success of the study is based on a complex 3D printing process, called direct laser polymerization of two photons. The scientists focused the laser on a single drop of ultraviolet sensitive ultraviolet resin, to turn it into a solid polymer, where the molecules were simultaneously attacked by two photons. By scanning the laser in three dimensions, the technique can assemble cells periodically, with each cycle consisting of 160-nanometer thin sheets.

According to Bauer, each sheet consists of several small holes that allow the removal of excess plastic from the finished material. The material then undergoes pyrolysis, where it is heated to 900 degrees Celsius under vacuum for an hour. The end result is a cube-shaped carbon network, with the highest degree of solidity that scientists think is achievable for such a porous material.

Sheet carbon nanostructures have great potential for applications, especially in aerospace. The combination of hardness, durability and low mass density of the material allows to significantly enhance the performance of aircraft and spacecraft.