The 4,000-year-old tomb contains the remains of a chieftain and magician

UK - Researchers believe that ancient tribes buried the shaman in the same tomb to escort their chiefs to the afterlife. 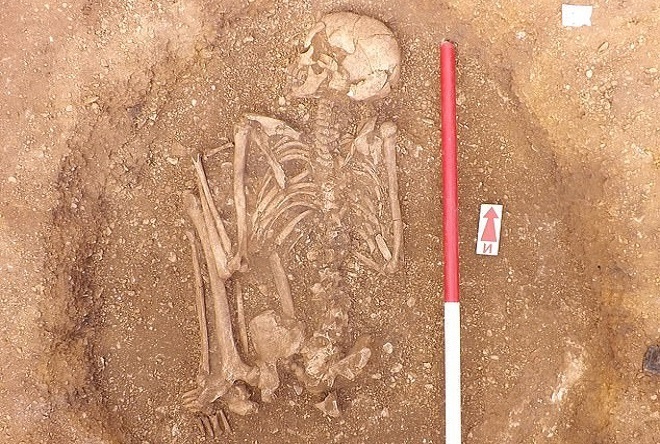 The remains of the mage in the ancient tomb. Photo: Archaeological Association.

The remains of the Bronze Age chieftain were discovered in a thousand-year-old tomb in the town of Lechlade in the county of Gloucestershire, along with four cowhide rugs, bronze daggers, whale bone knobs and wrist protectors. when shooting archery, sharpened green stone, ignition set and mage body in a kneeling position facing the owner about two meters away. This is the first evidence of the practice of sacrificing people in the British Isles to lead the spirit of the tribal leader, helping them to the afterlife more smoothly.

Archaeological Association of England conducted excavations in the area before the construction of a skateboard park and memorial. The team believes that the two men in the tomb come from the Beaker culture. Most likely they were descended from a group of people from the Pontic-Caspian steppe in eastern France today and to England hundreds of years earlier.

Andy Hood, a member of the Archeological Association, said that finding so many cowhide in a tomb was quite unusual, proving that the chief had a great influence on the tribe. He was also the first to be buried with metal weapons in England.

Researchers were unable to determine the chief's age, but the magus buried on the opposite side was in the mid-50's and 60's. It was the magus's kneeling posture that led the expert group to believe that he was chosen to be sacrificed, similarly in many parts of Europe and Asia. Shamans may be buried at the same time or immediately after the chief's burial.