In the age of universal internet, devices using Wi-Fi are increasingly popular. However, the problems of wifi and complaints about connection access, network speed are still quite a lot of questions. If you are still wondering about how to optimize your home wifi device, or have tried the methods on the internet but still not effective, please pay attention to these 4 tips. The advice was given by Alf Watt, a former Apple Wi-Fi engineer who also created the great WiFi utility Stumbler.

How to help you use wireless networks better

If your home or workplace uses multiple routers or transmitters, set them with the same SSID (wireless network name). The main purpose of this naming is to let client devices (access devices) divide themselves and identify which network is the best to access. 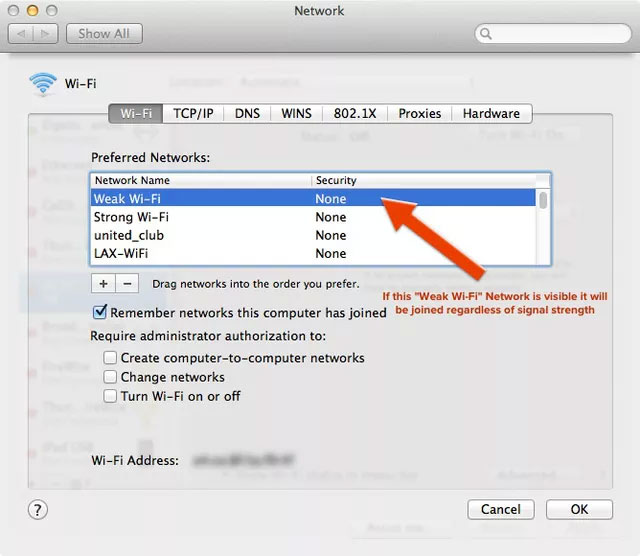 For Apple devices, the default is to select the network in order of your preference (not automatic). If you have multiple wireless networks around, your iPhone or Mac will prioritize browsing the Preferred network list you choose first to pick out the wifi network, even that network doesn't have the best bandwidth. For example, in the list of networks with the best network A, but in your list of only B and C networks, the device will still choose B, C first. But, when you name identical networks, your device has to find the one that has the best stability (not necessarily the best signal) by itself. Therefore, naming identical wifi is a great solution!

2. Solve bottlenecks with access points that use less energy
For locations with many different access points and with multiple terminals, such as apartment buildings, the bottleneck problem is placed first. In these locations, it is required to meet a fairly large number of visitors, not just a few devices like in households. If the number limiters were too small, many people would not be able to access that wifi point. The best solution is to increase the number of access points, and set the transmission limit for each address. This helps to divide resources evenly while still meeting large amounts of traffic effectively.

3. Do not use the 40MHz "Wide" channel on the 2.4GHz band
Some (non-Apple) routers will allow you to use "Wide" channels on the 2.4GHz band. The problem is that at this frequency band, the signal is quite interference and disruptive when accessed. Bluetooth is also on this band, so interference is inevitable. Moreover, Apple has not supported 2.4GHz wide channels since many years ago. Therefore, even if you turn on this channel on the router, the iPhone or MacBook will not be accessible. 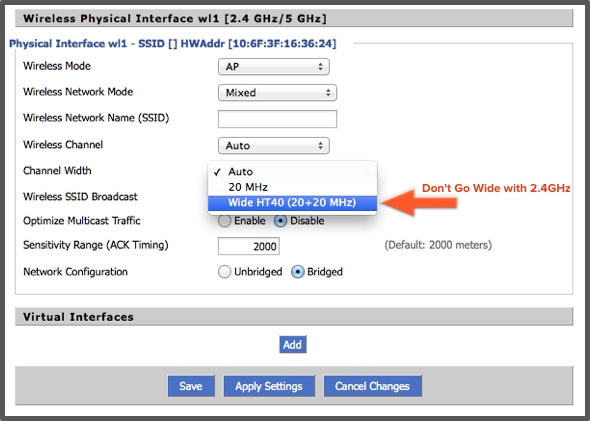 For a 5GHz transmitter, the 40MHz channel is a perfect fit. And with 802.11ac (only at 5GHz) you can push up to 80MHz or 160MHz channels. However, consider choosing, because the 5GHz band only supports up to 2 160MHz channels only. The good news is that current 802.11ac routers all use "cognitive radio" technology to allow intelligent switching between channels. Routers will listen before answering and move from 80MHz (or 160MHz) to lower channels if they detect another router in use in the same band.

4. Good antenna orientation
Most current router models have internal antennas, so leveraging the antenna orientation can also greatly improve the wireless signal. With the transmitter with 2 antennae (2 antennas), the advice is to adjust them lying perpendicular to each other, one straight up and one horizontal. This will maximize reception when both the client and the access point are polarized (the antenna points in the same plane). Some devices you use may have horizontal, or vertical reception antennas, so placing the two antennae in these two locations will be able to take advantage of the state and maximum pairing with client devices. . 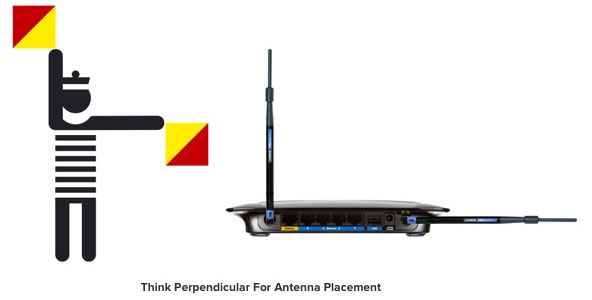 The above is useful advice not only for wireless network users but also for small or home network managers. They are advised directly from the creator of the wifi analysis software iStumbler, and are also former Apple Wi-Fi engineers. So please save it to the app!