When California officials want to know if people adhere to the social separation rules, they look to a new data source - a map provided by Facebook. This map shows the locations shared on Facebook by tens of millions of smartphones, showing that a large number of people still gathered at beaches and parks in mid-March. Shortly thereafter, Gavin Newsom, the governor of the state, issued a love command. Bridge people at home to stop Covid-19.

Newsom's move is only an indication of the cooperation between government officials and technology companies in the fight against "common enemies". This wave takes place across the globe, though disturbing by the daily activities of users like what they do, with whom ... can be collected via smartphones.

Traditional measures, such as extensive testing and tracing of F1 cases based on the epidemiological history of F0, remain the most effective way to control the disease. However, when the blockade and quarantine order is removed and people return to normal life, technology can "join hands". 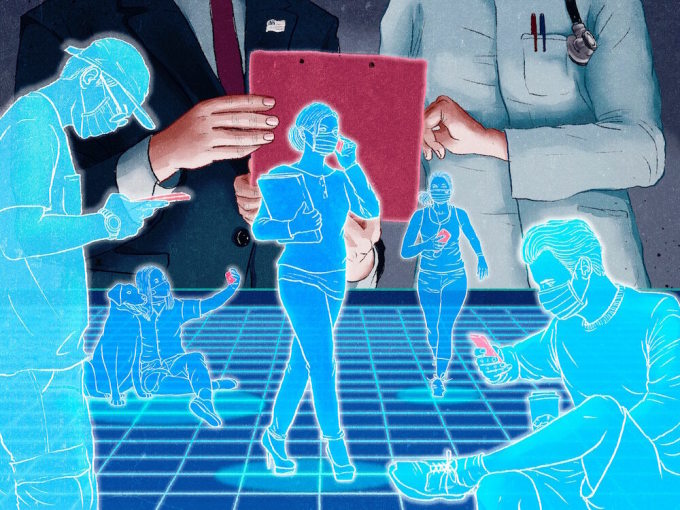 Location data on smartphones is being targeted by many governments to prevent new outbreaks when easing isolation orders. Photo: Washington Post.

Facing unpredictable consequences of the pandemic, people also began to accept monitoring tools. A Pew Research survey published late last week showed that more than half of US participants "partially accepted" the government's use of smartphone data to determine where Covid-19-positive people went, contact with whom. 45% agreed for the government to take this approach to people who may have had close contact with someone infected with the virus. However, the support rate drops if the government wants to control smartphones to ensure people comply with the order of spacing when only 37% accept location tracking.

Most technology solutions, such as the Facebook map provided to California, use anonymous data. The state of New Mexico also exploits anonymous information on phones to predict when demand for hospitals will increase.

However, some Asian and European countries are going further. For example, many Israelis received a text message from a health authority, based on phone location history, that they had been near a newly discovered Covid-19 person, requiring isolation for 14 days. South Korea also uses location data on phones to reconstruct the movement of an infected person, then send a warning to people in that area.

Similar measures are being developed in the US, although less drastically. In early April, Apple and Google announced developing new features for iOS and Android to help users proactively determine whether they have ever been exposed to a new virus infection. Unlike Israel, this way, in the words of the two firms, is "completely anonymous, voluntary" and is designed to ensure the privacy of users. This Bluetooth connection is also gaining attention in Europe, as Germany is expected to launch in late April and France in early May. Vietnam has also announced the Bluezone application from April 18 but has not yet deployed.

A smartphone is a data warehouse, where telecom companies know where users are by determining what cell phone signal their phone is connected to, where many software, including Facebook, can receive them. GPS data or via Wi-Fi signal. Most smartphones can also determine its distance from other devices by scanning for Bluetooth in close range. This information has the potential to be useful data for the government to determine the movement trends of people in the region.

In addition to privacy concerns, health experts also wonder about the effectiveness of technology. Despite being considered as one of the new weapons, no one can guarantee whether the time, money and effort devoted to building and deploying these technology solutions will help people really "live together" safely. "in the post-isolation phase. Singapore also employs a number of tracking technologies that were once praised for good disease control, but are now becoming the largest epidemic region in Southeast Asia.

"Before deploying on a large scale, we need to understand how that technology works," said Daniel Weitzner, a former White House employee and now involved in tracing technology development at the Massachusetts Institute of Technology. "You will not want to trade privacy risks without achieving any benefits. We want clear evidence of effectiveness before encouraging millions of users."

For example, the traceability solution using Bluetooth connectivity is considered the most accurate among current distance measurement technologies, but it is still limited as it considers two people separated from the whole wall as "contact." near ", create fake alerts. To avoid false alarms, applications only record contact cases that take place for at least a few minutes. In contrast, such a time setting risks risking of exposing cases of exposure, like a public sneeze that spreads a large number of viruses within seconds.

"A lot of companies are collecting data about us without even knowing it," said Beth Noveck, a technology expert in New Jersey. "But in a dilemma, that data can be used for good purposes, supporting pandemic prevention."